Music Appreciation in our (Home) School

I am in my sixth consecutive year of educating our two youngest sons at home.      When these two boys were very young (ages 5 and 7) I had multiple sources of inspiration all in a very short period of time and was bitten by the homeschooling bug.  So we gave it a try. That was my daughter's first year out of high school, my oldest son was a high school senior in our local public high school.  The middle son was a first grader and the baby boy was a preschooler.   I believe that year has been documented in an earlier post; if not, then I will write about it one day.

During that year, I had several naysayers in my life and I allowed myself to be convinced that the public school could enrich their young lives much more capably than I could.  So when August of the next school year arrived, back to public school went the second grader and the kindergartener was enrolled.   And we had mostly good experiences from year to year for the next four years, except for that one really bad year! (See October, 2012, Our Journey To and Through Homeschooling:  Our Year With the Drill Sergeant.)

Knowing that neither my rising sixth grader nor I were ready for the public middle school, I brought both boys back home beginning in school year 2008-2009.  We have been mostly enjoying education at home since that time.

Having begun my own education in homeschooling during that very first year, I knew when I brought them home this time that I wanted to use the Charlotte Mason approach to our home education.   Who is Charlotte Mason you might ask.   She was a British educator who lived from January 1, 1842 until January 16, 1923.   You can read more about her here: (http://en.wikipedia.org/wiki/Charlotte_Mason), here: (http://www.amblesideonline.org/WhatIsCM.shtml) or here:
(http://simplycharlottemason.com/basics/started/whowascm/).  She wrote prolifically about her ideas and findings on the education of children.

This is one of my favorite portraits of her: 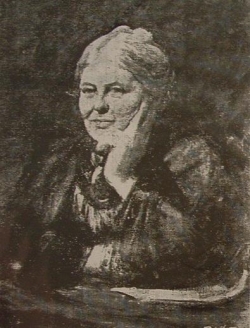 One aspect of a Charlotte Mason education is music appreciation which includes hymn study, classical music and folksong study.   I had always thought of  music appreciation, artist study, handicrafts, poetry, Shakespeare, and Plutarch study as the "extras" of a CM education.  And yet about three to four years ago, I began to take hold of these areas and began to see them as some of the most important use of time in our days.  There is a peace about listening to great music (even amidst the groans of teenage boys.)  There is a beauty in the music and art that speaks to our souls when we allow it.

One of our classical pieces from this term which has become a favorite of mine can be found here:
http://www.youtube.com/watch?v=ffBK-EYjs90

Prior to this term, I had heard of  Franz Josef Haydn but did not know I would love his music.  I found myself giddy the other night while on the way to the boys' volunteer work; the radio was on NPR and I heard those familiar strains of music.  I told them, "Listen!  That's Haydn.  I believe it's the concerto 104."  Okay, it was symphony no. 104.  But it was a wonderful feeling to realize that I was recognizing an artist's work!

I have a preacher friend who said a few years back that he likes to get out of the way and let God's words speak for themselves instead of always feeling the need to expound on every single passage from scripture.  That statement resonated deep within me and I began to realize that what holds true in scripture study also holds true in great art.  I don't have to have all the answers or a set "lesson."   The art is inspired by God and is for our enjoyment and to find Him through our exposure to it.  So now, we rarely discuss this symphony or that piece of art.  We just listen and look and enjoy.

Both boys are in their high school years now.  It would be easy to skip any of these "extras" thinking that we have more important topics to cover with all the geometry, algebra, and chemistry waiting on us.  But at least four out of five days of each week, we begin with reading a chapter of scripture together and then listening to great selections of music.  We follow up with some poetry two or three days per week, some Shakespeare one day per week and a beautiful piece of art another day.   I cannot imagine a better way to begin our school days other than with these gifts of Truth, beauty, and goodness!

Email ThisBlogThis!Share to TwitterShare to FacebookShare to Pinterest
Labels: Our Journey To and Through Homeschooling