Give thanks -    30 days of  gratitude...
For you created my inmost being;  you knit me together in my mother’s womb.  I praise you because I am fearfully and wonderfully made;  your works are wonderful,   I know that full well.  Psalm 139: 13 - 14
I feel as if it's predictable where I will go with my thanks giving today.  But oh well, today I am most grateful for my children! 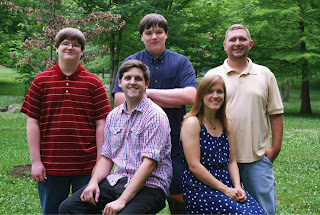 Twenty-nine years ago, I was pregnant with my first child who turned out to be a beautiful baby girl.   I labored hard and long to bring that little person into this world.  I remember when they lay her on my belly just after her birth, I just stared at her in overwhelming wonder and love and uttered, "Baby."   Pure joy.  In adulthood, she gifted me with another child to love, a son-in-law who has been part of our family for eight years now.  I am so proud of the marriage they have built and the beautiful children with which they have been blessed.

Eighteen months after the birth of that baby girl, I labored again and delivered a big 9 pound, 5 ounce baby boy.  He has been a joy all his life.  Being a typical second child, after the first few months of colic, he has been laid back and "easy" to raise.  Now that he is an adult, he has admitted to my not always knowing the whole story.  It turns out that sometimes his "easy" was sneaky.  Ahem.  Regardless of all that, he is a wonderful man, a true friend, thoughtful and giving.

I recently learned that a child born after a miscarried pregnancy is called a "rainbow baby."  My third child, my second son, is a rainbow child.  He was born seventeen years ago after two miscarriages just months apart in 1994 and early 1995.   Nine pounds, one ounce at birth, he was my smallest baby boy but so far, he is the height winner in our family.  He has a fun sense of humor, he is a great student, and he makes his mama proud quite often with the way he is "turning out."  I can see him maturing in so many ways and I am proud of the man he is becoming.

My baby, another boy, is going to be fifteen in less than a month.  I can hardly wrap my mind around that fact.  He also was a "rainbow baby."  He was nine pounds, three ounces at birth.  From about the time he turned two, I became convinced that he would be the reason for my first heart attack.  He was my first climber and daredevil.  I was amazed that he made it to age four before he suffered his first concussion!   He is a doer.  He wants to be busy and randomly does jobs around the house that he knows need doing.  He is also a very compassionate young man.   He blesses my life daily!

God blessed me immeasurably when he gave me the gift of motherhood.  I love my children thoroughly.  Their gifts and talents are amazing and I could not be more proud of each one of them.

What are you thankful for on this third day of November?